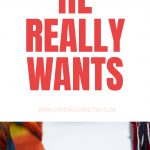 Gift buying for my husband is always a challenge. I can never come up with many gift ideas for him! I adore the guy and would give him anything, but he usually tells me he wants something outrageous or nothing at all. Lame.

So, a girl’s gotta find something to get her guy (or even her dad, for that matter). You know what I’m talking about. Even if he goes to buy that $300 game console the week before Christmas, he still needs something to open on Christmas morning. And if he’s already spent all the spending money the month before his birthday, what’s a birthday party without a present to open?

Plus, I know every time I turn around there’s another holiday I have to buy a gift for (Father’s day, birthday, Anniversary, Christmas, Valentine’s, I-know-I’m-missing-another).

So, here are some of my go-to gift ideas for guys.

My husband doesn’t go anywhere without his water bottle. Heading to Home Depot to grab some supplies? There’s a water bottle at my feet in the car. Work? He’s got it loaded and ready to go. Yard work? It’s always full of ice and freezing water for hot summer days. Because he uses them so much, we’ve gone through our share of water bottles. We’ve tried one similar to this one and liked it for a while until we got this one. He said this one is designed better and he likes that the lid isn’t always in his face like the other one.  But! I can attest to the fact that both of these water bottles will hold ice water for over 24 hours! 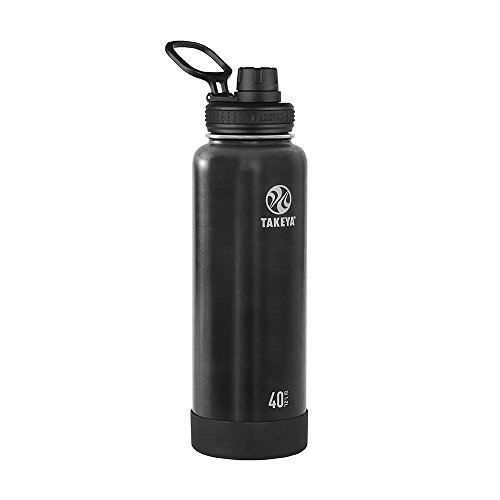 If your guy is a guy he probably needs one of these. Even guys with beards need to shave sometimes (like their necks and cheeks…I had no idea about this until I got married?!!).

An electric razor might be his favorite new thing. My husband has really sensitive skin, and regular razors always give him razor burn, no matter what he does to prevent it. Plus, shaving takes him an extra 15 minutes every morning getting ready, and I know it’s 15 minutes a day he’d rather be sleeping in the morning. So, I’m thinking about getting him one of these electric razors made for sensitive skin. It will save him time shaving (the reviews say it’s a faster shave) and hopefully get rid of his razor burn! Win win! 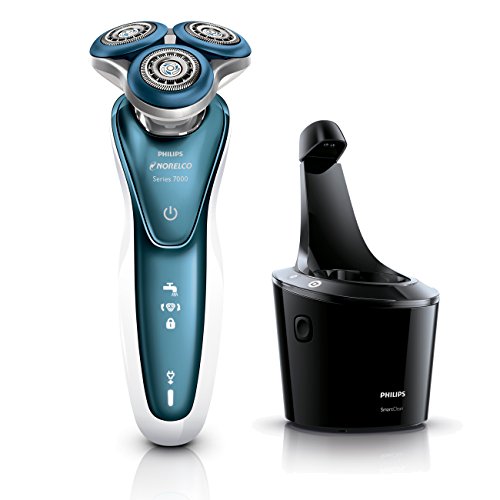 If your man doesn’t have a beard, hear me out here. Even without a beard, sometimes a guy needs a trim. That scruffy just-shaved-yesterday look is really in style right now and it’s almost impossible to get that look without the right trimmer. Plus, sideburns. Hello.

Once we finally figured out that beard trimmers could get him the look he wanted,  it was impossible to find one that would hold a charge. We spent lots of money testing them out before we finally found the one. This trimmer is amazing. He’s had it for almost a year now and has only charged it like 3 times. And that’s with using it every day.

He really likes to rock the scruffy look, and we found that a lot of trimmers wouldn’t shave close enough to give him the just-shaved-yesterday look. This trimmer fits the bill perfectly.

If your husband goes to work in the morning, there’s a good chance he needs a few things to help him make it through the day. My husband carries ear phones, eye glasses, medicine, an extra external hard drive for work, an extra charger, his water bottle, pens, and a few other miscellaneous things to work every day. Plus, he carries a separate bag to the gym full of typical gym stuff like clothes, shoes, and toiletries.

Thankfully, I’ve found some awesome bags to send him off in style! He switches out between a few different bags, depending on what his week looks like. He has a backpack, gym bag, canvas messenger bag, and a larger leather messenger bag.

This backpack is actually one of my favorite bags. It’s a simple, easy bag. The canvas is thick and nice, but the bag isn’t overly heavy. If you’re looking for something simple and stylish for a guy, this canvas backpack might be the answer. And for what it’s worth, I would totally carry this bag, too.

I think we actually got his duffle bag at TJ Maxx, but it’s really similar to this bag on Amazon. He loves that it’s a canvas and leather bag that doesn’t look like a gym bag, but still holds everything he needs with room to spare.

And he also has two messenger bags. This one is a fluke that turned out great. He has a super nice all leather messenger bag that is large enough to carry the laptop home from work if he needs to. I found it on sale at a Fossil Outlet Store. I couldn’t find it online, but it’s pretty similar to this one on Amazon.

And then he has a smaller canvas messenger bag to carry his daily stuff in. Sometimes he trades out the smaller messenger bag with the backpack, depending on his gym bag situation.

We have managed to cover every scenario for traveling to work and weekend travel with these four bags.

Okay, so I totally get it that this is on the pricier end of things. But I’m including it here because my husband LOOOVES his. We have Samsung phones (which we also love so much even after owning iPhones), so he jumped for the Samsung S3 watch. They have different versions, but he’s a more rugged/sportier guy and opted for the tactical looking watch.

I’m blown away by the functionality of it. He can do everything on his watch that he can on his phone (except he needs some practice typing :P). He can sit through dinner with us without needing to check emails buzzing through on his phone because he can glance at his watch and make sure it isn’t someone needing something from work. He can be in a meeting and see a text from me come through without feeling like he’s being rude to his boss or whoever he’s meeting with.

So, if you’ve been on the fence about getting a smartwatch, they’re amazing. I’ve even thought about getting one as a stay at home mom just so I don’t have the temptation to be glued to my phone all day, but I can still feel safe knowing I’m getting calls and messages.

Who doesn’t need headphones these days? If you drive, workout, do yard work, listen to podcasts or music, you need headphones. I’m not saying you have to have the most expensive headphones, but my husband can get picky at times. He picked these TOZO T10 Bluetooth 5.0 Wireless Earbuds and loves them. 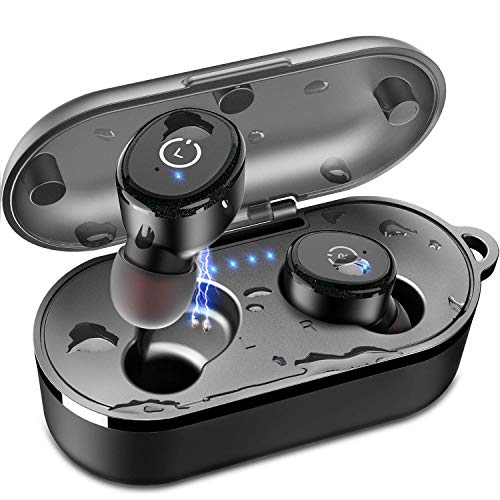 He has err, um, spacious ears and earbuds tend to fall out while he’s working out or mowing the yard. But who wants to walk around looking like 1985 is calling with big earphones over their ears? (Unless you’re cool like that, I guess. (For the record, he did rock that look for the past 3 years with his Bose headphones)). So, now, he has these earphones that fit great and sound almost as good as Bose.

Hear me out here.

Not every guy loves working out, but my guess is that there are times when your guy will need to work or play hands-free, but you probably still want him to have his phone handy. These running belts are the perfect answer. My hubs uses it at the gym so he can listen to audiobooks while he’s biking, but he’s used it other times (like that time he needed to climb on the roof and didn’t want his phone to fall out of his pocket). They’re cheap and make an excellent stocking stuffer. 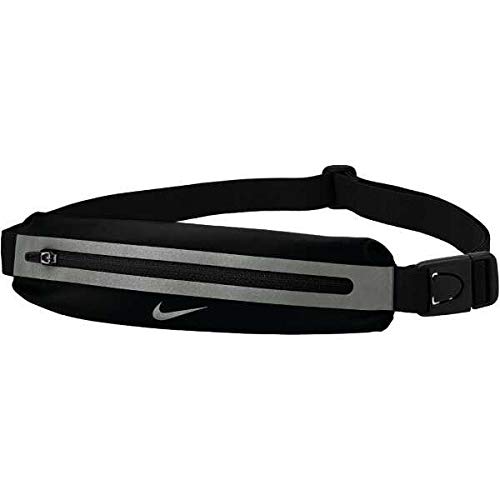 I remember the days when my dad always had a worn spot on his back pocket from where his wallet always was. Well, those days are long gone and men are opting for slimmer wallets that can sit in their front pockets. Those big leather old school wallets can cause back trouble in a hurry, not to mention they’re huge even when they are empty. The updated minimalist style is streamlined and functional, plus it won’t hurt his back. 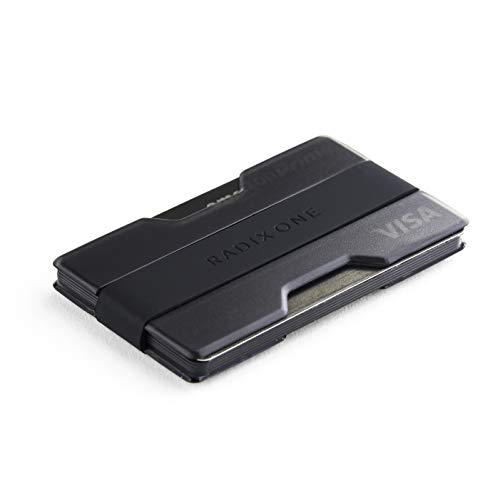 My husband has a metal wallet now, but it has a slot on one side and a money clip on the other. If he doesn’t have the exact right amount of cards in his wallet, they’ll all fall out because of the fixed size. Plus, he can never streamline it to make it smaller. So, shhhh…this is going in his stocking this year!

Gift Ideas for Him 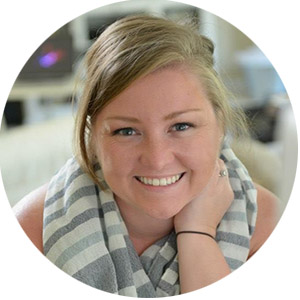